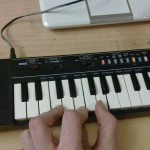 Ever plugged in too much power into your electronic equipment? Or for some other reason seen smoke come out of it? A friend of Umeå Hackerspace had a Casio PT-1 that he apparently had tried to use with a bit too much power in the supply. Fortunately he hadn't caused too much damage.

The Casio PT-1 is an old piece of hardware, dating back to the long-long agos when circuit boards weren't packed with integrated circuitry and everything was done in just a few couple of chips. As a result of this, it has been the subject of much circuit bending throughout the years. A wonderful hobby and definitely something Umeå Hackerspace encourages!

[caption id="attachment_253" align="aligncenter" width="300" caption="Step one: Flip it over for unscrewing!"] 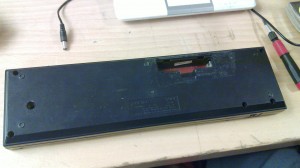 But this post is about a damaged PT-1 and how we managed to fix it. Just as with most ordinary hardware problems, the error lies in a single or very few components. In this case it was a blown circuit, a transistor, which had literally been blown to pieces:

[caption id="attachment_254" align="aligncenter" width="300" caption="The blown transistor, with the new one in place on the board."]

It was unfortunately impossible to read the label on the component itself, but according to the circuit board there was supposed to be a transistor there. What was confusing was the layout according to the board, with the Base on one of the edges, rather than in the middle as one is often used to. Fortunately the circuit board - as is more common with older hardware - had the component name printed on it: 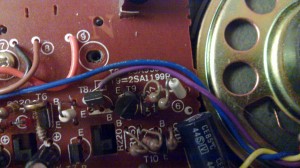 A quick search on the internet gave us the datasheet for the old component, a 2SA1199R, which turned out to be a PNP transistor. Fortunately we had a lot of BC557s lying around and grabbed one of those. Remembering the odd layout for the legs, we matched it up (backwards and with a twist!) and stuck it where the old component had been fitted. A little bit of soldering later, it was time to screw the keyboard back together. Not much to our surprise, it worked. Old hardware sure is nice to work with!

There's a reason why there are safety circuits built in. Not just for your physical safety, but also for the electronics. Hardware is much easier to fix when everything isn't integrated - and even more so when the components are labeled and specified right on the circuit board!