Last night we had a great hacking evening with lasers and security-related wireless transmissions. What more can one ask for?

OpenLase is a sort-of framework with several stand-alone tools which are combined to produce real-time laser graphics with hobbyist-grade components. One of Grill-bit's hackers hast started fiddling with this, getting Jack to run and connecting the output to his two galvos which twist mirrors to create a laser show.

[caption id="attachment_161" align="aligncenter" width="300" caption="This is supposed to be a Pong playing field. Due to bugginess we'll avoid posting a video. We'll get back to you when it works as it should :)"] 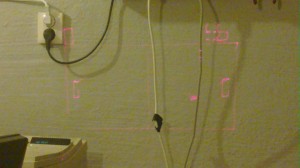 So far it's a bit buggy, mostly because of certain hardware making it impossible to show as many points per second as one could wish for. Nevertheless it's a cool proof of concept and definitely in the cost-range of any dedicated hobbyist! Real-time laser graphics is definitely something fun we encourage more people to play with!

[caption id="attachment_162" align="aligncenter" width="300" caption="The actual hardware in use. Two galvos, a soundcard, a board with op-amps etc."] 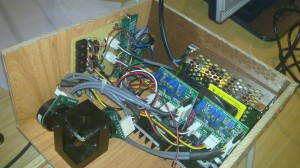 Also we've got an RFID reader now for Mifare tags etc. that may come in handy for examining bus cards and entrance passes! Progress is soon to be made.