Arcade machines are a thing of the past, you might think. Big, clunky and expensive with a just about as lifelike experience as your old 15" CRT, except for the actual controls. And those only interest people with some sort of nostalgic feeling to the golden arcade days. 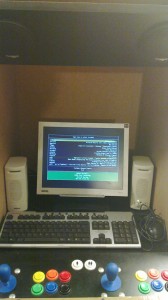 And there are of course those among us who still remember the joystick. As a result, Grill-bit has for a long time had an arcade-ish platform which has been the case of a multitude of hardware/software bugs and just plain bad luck. Either the motherboard's been bad, or maybe it lacked an AGP slot (or better) for accelerated graphics, or the graphic cards have been crap. One try included an old OpenGL accelerated PCI graphics card on a super computer node, but random problems kept popping up... So better hardware had to be found.

So, as it happens, last night when cleaning up in the space and getting ready for 2011, a motherboard complete with CPU and memory located nearby was found in one of the shelves. Voilà! It worked marvellously. An already installed Ubuntu system with MAME, previously used in the buggy constellations, was checked with badblocks and then booted with the rest of our arcade machine.

The controls are currently buggy. For some reason the entire thing is steering to the left all the time, but this'll be looked at more closely later. But once it's entirely up and running you're invited to come and play! If we can find a permanent place for it, as it is taking up a rather lot of space in our space.